First a quick update on recent Stone Cruiser Class Activity. Following the end of the main “Cruise in Company”, Sam (on Daydream Believer) and Howard (on Sea Nymph) continued West to Cherbourg and then on to the Channel Islands. Howard then continued further West along the French coast, while Sam stayed in his beloved St Peter Port. They then met up again in Dieppe before working their way back up the French coast and then home to the Blackwater.

It didn’t take Sam to get wanderlust again and he was soon off sailing to Ostend, where he rested for a while before heading into the Dutch Canals.

In late August a couple of the cruisers sailed up to Clacton, where they anchored off the coast for a ringside view of the Clacton Air show. Next season I’ll make a note of the date and if there’s enough interest we can make it an “official” Stone Cruiser Class event. 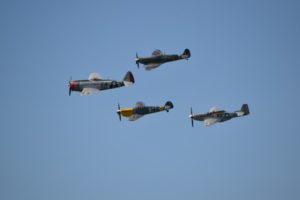 Cruise in Company to Brightlingsea

On Saturday 31st August, Baccarat, Chiron, Go Between, Sea Nymph and Warrior all sailed over to Brightlingsea, with Wagtail joining us for the grand depart. Unfortunately the hoped for breeze arrived far later than the forecast had suggested, resulting in a slow reach against the incoming tide, but at least the sun was shining! The crew on Chiron eventually got bored of sitting out in the tide watching Sea Nymph and Warrior sneak up the shoreline and voted unanimously to switch the motor on and make haste to Brightlingsea and a cold beer… On arrival they were somewhat surprised to see Dave Taylor and Baccarat already moored up (although he had made the rather shorter passage from Bradwell…). The others arrived not too long after on a strengthening breeze, and they didn’t take much persuasion to join the drinks party onboard Chiron.

After a quick freshen up we all headed ashore on the water taxi and met up in the Yachtsman’s Arms before walking into town for an enjoyable meal at Vines Bistro. In order to make sure that we didn’t get lost in darkest Brightlingsea we’d made the precaution of positioning a waypoint at the University Community Sailing Club, where we had a quick night cap before getting the water taxi back out to the yachts. 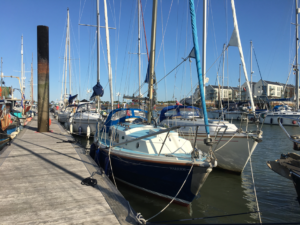 On Sunday we woke up to another sunny morning and after a leisurely start we set off at around 11.30am. The winds proved to be somewhat variable in terms of direction and strength, but we all enjoyed a beat back into the Blackwater on a rising tide.

We’re all aware of the hazard posed by poorly marked Lobster pots. However, this season the Stone Cruisers have also been battling with abandoned fishing nets…

On the June cruise, Chiron and Celebration were joined by Chris and Diane Roberts on board Trio. As the three yachts motored down the French coast towards Dieppe, Trio suddenly came to a stop and a radio message was sent to the other cruisers advising that they’d caught something round their propeller. Chiron and Celebration turned back, concerned that one of us was going to have to take Trio under tow and we’d be unable to make it to Dieppe before the tide turned. Fortunately, after being lent a snorkel and flippers by the crew of Celebration and having found a sharp serrated knife in the galley, Chris was able to dive under the boat, identify that it was a fishing net around the propeller and then cut it free. Luckily not too much time was lost and we were soon back on our way. 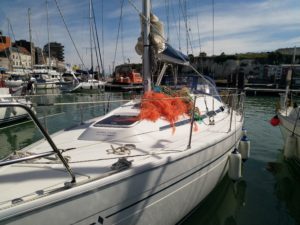 Sam had the next diving adventure on the Dutch Canals, after getting a net caught around his propeller just before entering the large and rather intimidating lock at Flushing. Fortunately he was able to limp through the lock, but then had the joy of diving under the boat in murky water to cut the net free whilst holding his breath… 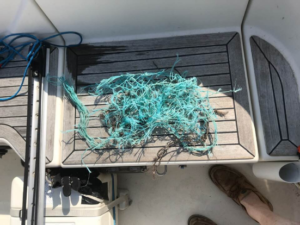 On a more positive note, it’s good to see that the Stone Cruisers are doing their bit to clear the oceans of unwanted plastic waste!