It has been proposed that we organize a cruise to the Dutch canals. This poses a new problem to some who have never been there before. This is because some places, such as Middleburg & Willemstad, have “box berths”. These consist of a row of poles set parallel to the pontoon. One parks the boat between the poles with either the bow or stern square to the pontoon & the other end of the boat tied to two of the corresponding poles.

In Middleburg the poles are about 9 metres from the pontoon so the stern of many boats stays put between them. In Willemstad the poles are much further away so the stern can wander to one side or the other if not properly secured to the poles on entry.

Because I will be single handed & because I was holidaying in Ostend, I decided to nip up the Canal De Walcheren from Vlissingen to Middleburg to test my single-handed skills at mooring in a box berth.

Below is how I did it. Hope you find it of use. 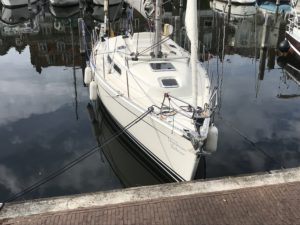 How to enter a box berth

What I did was make up 2 /10mm diameter lines 9 metres long, with a spliced eye one end. I hooked the eyes to the spring cleats & the other end I passed over the aft cleat & round the aft winches. I left lots of slack in the lines & hung them on the guard rails. I put the fenders onto the side decks to stopped them snagging if I rubbed the poles (I did not actually touch them until right in) But they were ready if there were any boats in the next box.

I lined the boat up square with the box & motored in with enough bias for the wind. That was important to start me off right.

As I motored in, I first looped the windward one over the pole, then the same with the lea one. By straddling the tiller with my legs, I then played the 2 lines on the winches such that as I went forward, with the engine in tick over, I could steer the boat by the tension on one or the other line. Mostly on the windward one.

When I judged the bow was just off the dock, I left the engine in tick over. Put the lines into the tailers on the winches & nipped quickly forward & stepped over the bow with the bow lines. I then tied the windward line first followed by the other.

Back on the boat I stopped the engine & asked the nonexistent crowd not to clap & cheer, but smile with admiration